This morning we woke to a raft of changes on the facebook news feed. The news content that we consume so frequently via social media sites literally disappeared from our eyes. It’s become habitual to use the social media platforms for news related content, and given that Australian internet users spend over 1 hour and 46 minutes each day on social media, and even longer on facebook, this development has significant implications for how we are consuming content. Searching for the answers across the facebook platform and seeing what was going on was no longer possible as users were met with the “No posts yet” on pages. 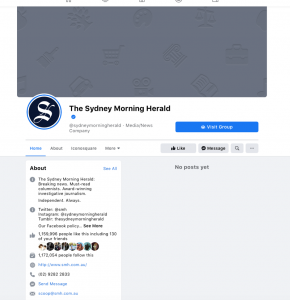 Facebook issued the following response, “The proposed law fundamentally misunderstands the relationship between our platform and publishers who use it to share news content. It has left us facing a stark choice: attempt to comply with a law that ignores the realities of this relationship, or stop allowing news content on our services in Australia. With a heavy heart, we are choosing the latter.”

For Australian publishers this means:

For international publishers this means:

The Australian Government has long been in discussion with both Facebook and Google regarding media bargaining powers. The ACCC highlighted the bargaining power imbalances between Australian news media businesses and digital platforms and in July 2020 released a draft code set to restore this balance. According to Pedestrian TV “The argument is that the media bargaining code will “level the playing field” between news publishers, which have seen their advertising revenues decimated in the last decade, and tech giants, which are part of the cause. For every $100 spent on advertising in 2019, $53 went to Google, $28 to Facebook, and just $19 to all other websites and ad tech.”

Last night (17th February 2021) the Australian House of Representatives passed the new bargaining code bill (News Media and Digital Platforms Mandatory Bargaining Code Bill 2020), which required social media companies to pay media outlets for using their content. The bill has bi-partisan support and is expected to pass the Senate and become law as early as next week.

Clearly this legislation was not well received.

Google has already reached an agreement with a number of media outlets (e.g. $30 million per annum with Nine Entertainment Co and $30 million with Seven West Media, but facebook is taking a different path.

Within hours the media sites had their content on the facebook platform wiped. Given one in two Australians use facebook on a daily basis this news will be far reaching.

At this stage the impact is fully yet to be determined. Treasurer Josh Frydenberg told media today he was given no notice, despite conversations with Mark Zuckerberg on Sunday. The Prime Minister Scott Morrison noted “Facebook’s actions to unfriend Australia today, cutting off essential information services on health and emergency services, were as arrogant as they were disappointing.”

What does this mean for marketing?

Facebook claims that “News makes up less than 4% of the content people see in their News Feed.” However, the significance is that many consumers rely on social media as the source of their news, particularly the younger generation.

We we refer to the role of social media as part of marketing strategy we often talk about the importance of not building your house on foreign ground – thinking about a balance of owned, earned and paid media. Facebook has always been the most dominant platform but for many brands its time to diversify your content mix. Building your owned community as a brand asset is more critical than ever!

Ironically, advertising for much of this content is still permissible, but when we posted this article on facebook the organic reach was non existent and it was not able to be shared! The social media giant is still happy to keep taking advertising revenue from many of these brands!

Either party could make a backflip and the news outlets clearly are expressing their outrage in how swiftly the change. Keep in mind that this legislation has not yet passed the senate and there could be some changes made given public backlash. However, regardless of what form the law is passed in, there are some obvious implications for how marketers use the platform:

What do you do if your page is impacted?

Sadly many non news related pages have been impacted. An appeals process for the ban will launch on 25 February for brands which have been wrongly impacted by these changes.  So far Instagram is not taking the same route, but given that they are owned by facebook this could easily follow. We will keep you updated here and post the link for the appeals as soon as it is available. We have some of our clients impacted by this change, so rest assured we’re onto it! As a starting point be sure to put in a form to facebook to lodge the complaint via this link .

Interesting times, we hope that there can be some mutually beneficial outcomes agreed here. For now, it’s time to rethink your digital strategies for 2021 as more changes like the Apple Ios 14 Privacy updates that may also have an impact. Be sure to reach out to the Mastermind team if you need further insights.